A very funny way to say/sing/show how cockeyed Evolution is! Enjoy...

Posted by Rev'd Reflections, a curate considers... at 06:59 No comments:

St George's Day: did you know?

Did you know that the legend of St George (the patron saint of England, Syria, Lebanon and indeed lots of other countries and whose commemorative day is today) is based on events not in Europe but in Libya?

The story goes that George apparently overpowered a dragon that had been demanding the children of the town of Sylene in Libya. He wounded the dragon and led him back to into the town where he proclaimed that he would kill the dragon if the people of the city would convert to Christianity and be baptised. Led by the king, 15,000 citizens submitted and were baptised!

Talk about making the most of a bad situation for the gospel! I for one am sure glad we have him as our patron saint and hope that we can somehow start aping our Medieval kin, for whom today (St George's day) was a major feast & national holiday, remembering George's valiance + his vanquishing of a pagan enemy. As Shakespeare (who is also celebrated today) put it: "Cry God for Harry, England and St George"
Posted by Rev'd Reflections, a curate considers... at 14:36 No comments:

Margaret Thatcher: "there ain't been a good'un since"

Of all the tributes that MP's gave to Thatcher at the recent recall, 2 stood out for me. The first was Malcolm Rifkind's which captured something of Thatcher's great wit. The second was Connor Burns' which had the following moving line:

Of course, no human mind, nor any conceivable computer, can calculate the sum total of my career in politics in terms of happiness, achievement and virtue. Nor, indeed, of their opposites. It follows, therefore, that the full accounting of how my political work affected the lives of others is something we will only know on Judgement Day. It is an awesome and unsettling thought.

Thatcher's Christian faith was something I'd heard little about prior to her death last week. However, having rooted around a little bit, I've discovered that her sense of civic responsibility was grounded in her deep Christian faith. During a speech before the General Assembly of the Church of Scotland in 1988, she outlined three distinctives for Christians involved in politics.

First, she said that Christians, realize they have been given the right to choose between good and evil. Second, that Christians are those who recognize that humans are made in God’s image and are responsible to use “power of thought and judgement” in making that choice. Third, she said Christians are inspired by Christ’s choice to freely die for our forgiveness of sins.  As she helpfully put it:

Christians must not profess the Christian faith and go to church simply because we want social reforms and benefits for a better standard of behaviour but because we accept the sanctity of life, the responsibility that comes with freedom, and the supreme sacrifice of Christ.

As part of the speech, she also emphasized the renewing work of Christ for those who choose to accept Him and she also urged believers to keep united the connection between faith and good works, and to be cautious of any social or cultural attempt to dissect good works from their Christian foundation. “Good works are not enough because it would be like trying to cut a flower from its root,” she said. “The flower would soon die because there would be nothing to revive it."

Connor Burns is right: "There aint been a good'un since. Listen to his funny and moving tribute below.

I've been doing some reading on the Biblical theology of food in preparation for some talks I'm doing this Spring/Summer. Today I came across a great quote on the history of the fork and how it was initially disparaged (in the Middle Ages) and only relatively recently (18th century) came to be widely accepted. Peter Leithart riffing of another Wilson (not Doug) writes this:

“The first true fork on historical record was a two-pronged gold one used by a Byzantine princess who married the doge of Venice in the eleventh century.  St. Peter Damian damned her for ‘excessive delicacy’ in preferring such a rarefied implement to her God-given hands.  The story of this absurd princess and her ridiculous fork was still being told in church circles two hundred years later.”  In some versions, she died as a punishment for eating with a fork (p. 191).  One wonders of Damian wasn’t more concerned about the gold than the fork.

As late as the early 17th century, “forks were still a joke.  A 1605 book poked fun at Henri III as a “hermaphrodite” so effete that he would “never touch meat with their hands but with fork.”  Henri and his silly friends “would rather touch their mouths with their little forked instruments than with their fingers” (191-2).

Italians alone adopted the fork early, on account of their taste for pasta.  An Englishman, Thomas Coryate, saw Italians in 1608 holding down their meat with a fork as they cut it.  He found the custom odd, but took a fork home with him and ate with it in England.  His friends Ben Jonson and John Donne teased him as a “furcifer.”

Over the following century, the fork took off.  Coryate had the last laugh.  By 1700, they were common throughout Europe.  Cromwell used a fork and after the Restoration, eating with fork rather than fingers became the acceptable, refined, civilized way to eat.  At the same time, plates began to replace bowls.  Good thing, since it’s hard to use a fork and knife in a bowl (193).

Marx recognized the revolutionary impact of cutlery: “The hunger gratified by cooked meat eaten with a knife and fork is a different hunger from that which bolts down raw meat with the aid of hand, nail, and tooth” (195).

Posted by Rev'd Reflections, a curate considers... at 17:31 No comments:

Labels: Smiles and Laughter, Wise words from others 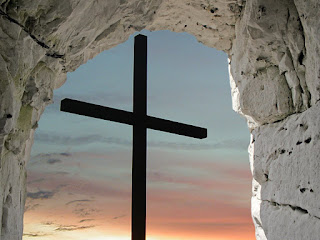 If Christ has not been raised, your faith is futile and you are still in your sins
- The Apostle Paul, 1 Corinthians chapter 15 verse 17
Posted by Rev'd Reflections, a curate considers... at 12:08 No comments:

Today April 4th, is the day in 1945 when Dietrich Bonhoeffer was executed by the Nazis. Here is an account of his final hours (taken from Bonhoeffer: Pastor, Martyr, Prophet, Spy by Eric Mataxas)

So less than twenty-four hours before he left this world, Bonhoeffer performed the offices of a pastor. In the bright Schönberg schoolroom that was their cell, he held a small service. He prayed and read the verses for that day: Isaiah 53:5 (“With his stripes we are healed”) and 1 Peter 1:3 (“Blessed be the God and Father of our Lord Jesus Christ! By his great mercy we have been born anew to a living hope through the resurrection of  Jesus Christ from the dead” RSV). He then explained these verses to everyone.

Best recalled that Bonhoeffer “spoke to us in a manner which reached the hearts of all, finding just the right words to express the spirit of our imprisonment and the thoughts and resolutions which it had brought.” The other prisoners in the schoolhouse hoped that they might be able to get Bonhoeffer to hold a service for them as well. But there would not be any time for this.

Best described what happened: He had hardly finished his last prayer when the door opened and two evil-looking men in civilian clothes came in and said: “Prisoner Bonhoeffer. Get ready to come with us.” Those words “Come with us”—for all prisoners they had come to  mean one thing only—the scaffold. We bade him good-bye—he drew me aside—“This is the end,” he said. “For me the beginning of life.”

Bonhoeffer also asked Best to remember him to Bishop Bell. Six years later, in a letter to the Bonhoeffer family, Best recalled what he had written about Bonhoeffer in his book, where he had said that he “was a good and saintly man.” But in the letter he went further: “In fact my feeling was far stronger than these words imply. He was, without exception, the finest and most lovable man I have ever met.”

Posted by Rev'd Reflections, a curate considers... at 11:36 No comments:

Writing is easy. You just open...

What does it take to write well? R C Sproul Jr begins his answer with this prize quote:


“Writing is easy. You just open a vein and bleed.” In other words, writing hurts. It hurts in part because you are giving up for public view that which courses through your veins...   precious few lines of work have such a clear and immediate connection between the product and the producer. It is my own life-blood, and when it is rejected or despised, I am rejected and despised.

Read the full article here
Posted by Rev'd Reflections, a curate considers... at 11:11 No comments:

Should women go to war?

Doug Wilson in fighting form gives the biblical answer (which by the way could also extend to roles such as the police, bodyguards, bouncers, etc)

Posted by Rev'd Reflections, a curate considers... at 14:49 No comments:

The Biblical posture for prayer?

I remember reading somewhere that the dominant posture for prayer in Scripture is either kneeling or standing (there is some occasional praying when folk are in bed, but most biblical praying happens when people are either kneeling or standing). So there I was minding my own business having forgotten this thought when a quote from Luther suddenly brought it all  back:

Is it time we stopped sitting when praying?
Posted by Rev'd Reflections, a curate considers... at 22:06 No comments: